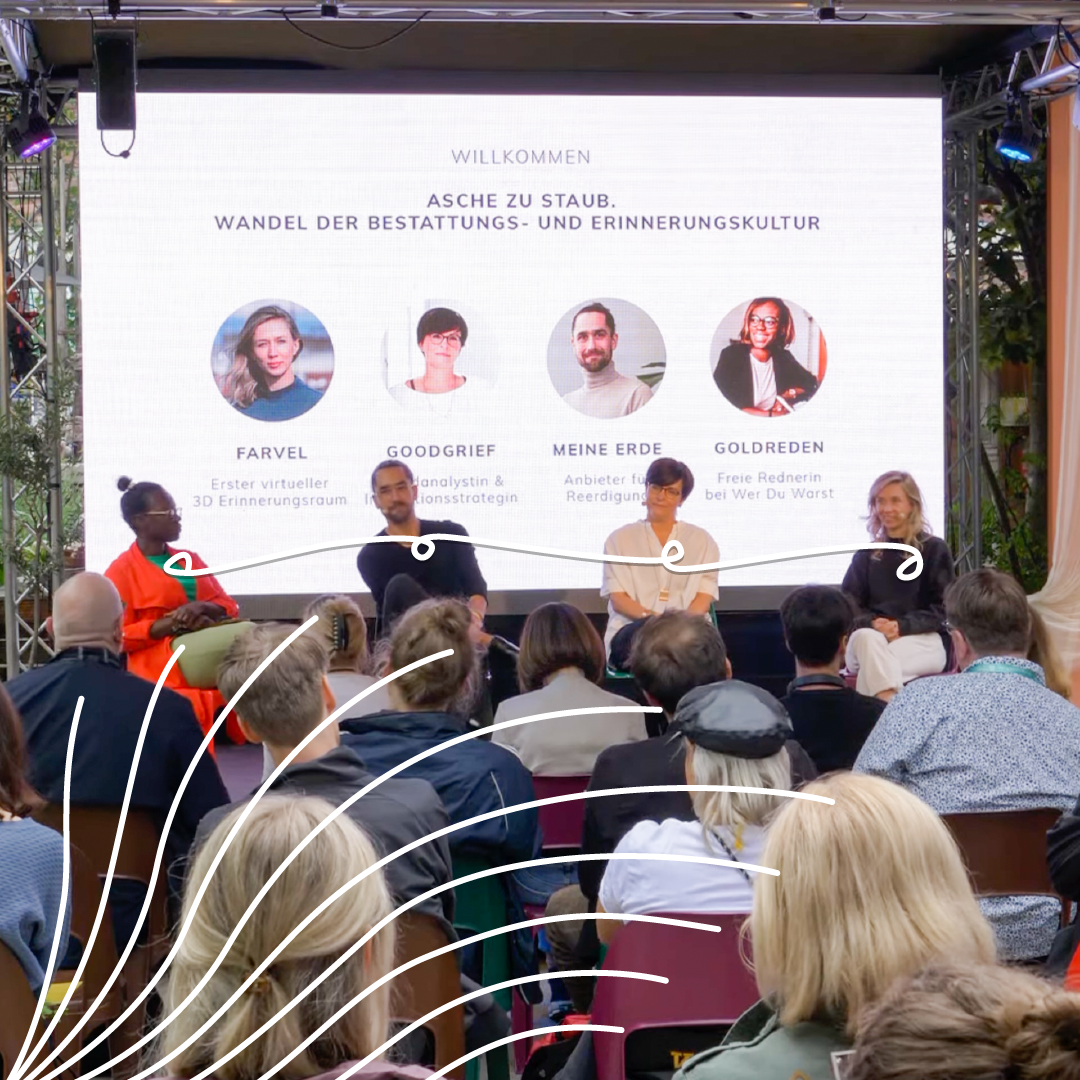 Backstage, final preparations are underway for the discussion panel at republica 22 with the topic "Ashes to Dust. Changes in the culture of burial and remembrance". The founders of farvel, the first virtual memory space, Lilli Berger, Markus Traber and Jennifer Beitel organized the discussion panel. The chairs in front of the stage quickly fill up. Last check. The founder of Good Grief and innovation consultant Stefanie Schillmöller takes a sip of water. The co-founder of Meine Erde and co-initiator of Reerdigung, which transforms bodies into fertile soil, Pablo Metz checks his notes on his cell phone one last time. The certified speaker Mathilda Goldreden, part of Wer Du Warst, takes the microphone as moderator of the panel. Lilli Berger makes her way to the stage, Markus Traber guides live through the room in the backstage area and Jennifer Beitel takes the community with her on Instagram.

Lilli Berger is the first to take to the stage and review the last decades of the funeral industry. For a long time, nothing happened in terms of digital transformation. Fortunately, a lot has been happening in recent years.

Mathilda Goldreden takes over the moderation and introduces the panelists. The following core themes emerge from the discussion with the fundamental question of what the burial and remembrance culture of the future will look like:

(Wo)Man's role in death and mourning:

The focus is on the individual with all his or her needs, which also affect the way in which mourning takes place. The consensus is that how we are buried or how we mourn should always fit the people involved. Relatives can also make new decisions after the death, because they have to be able to deal with the loss, says Pablo Metz. And that's why it's even nicer that new forms of burial, such as reburial, and new forms of remembrance, such as farvel.space, are establishing themselves and expanding the range of options. Grief is nevertheless very individual, and can hit you immediately after a death or even years later. That's why, according to Stefanie Schillmöller, an entitlement to, for example, 30 additional days of leave after a bereavement, which can be used flexibly, could be helpful.

Planning for your own death and grieving:

The beginning of life and the end of life belong together and work together. Pablo Metz compares it simply like this: While manifold preparations are made before a birth in order to have the time to take full advantage of the moment with the child, our society tends to hand over death to institutions such as hospitals. Yet dealing with death and planning around the farewell is just as connected to life as birth. Stefanie Schillmöller adds that dealing with the framework conditions in bereavement can give a lot of space to be able to completely surrender to grief and say goodbye. In addition, this can also help mourners develop their own rituals, such as painting the coffin or carrying the urn themselves.

All of our lives also take place digitally in many parts, so death should also be included digitally in our lives. However, according to Stefanie Schillmöller, it is not so much the transfer from offline to online that is meant, but the creation of new rituals, new visuality and new interactions. Due to globalization, our friends are also increasingly only to be found on the Internet, according to Lilli Berger from farvel. For many people, it is often not possible to say goodbye to the deceased person on site because of the distance to their family. In addition, there is also a great need for action in companies with employees who are often not invited to a private funeral service and then do not know how and where they can say goodbye. farvel.space enables mourners to have a place for saying goodbye, remembering and sharing that is set up to suit the occasion. Relatives can enter the space at any time and from anywhere and commemorate the deceased person.

Current burial forms such as the burial in the ground and cremation are far from being sustainable, explains Stefanie Schillmöller. With earth burials cooling aggregates consume very much energy, the coffins consist frequently of tropical woods and on top of it synthetic fibers, which occur both in the coffin and in clothes of the deceased person. Not to mention that the deceased person still takes drug residues, artificial joints, etc. with them to the grave and pollutes the groundwater in the long run. In contrast to the classical burial in the ground there is according to Stefanie Schillmöller in the Netherlands the possibility of burying humans in linen cloths. In Germany, according to Pablo Metz, burial has enabled the body's own microorganisms to process the deceased body into valuable humus within 40 days. This is then placed 30 cm deep in the active soil layer of the cemetery. Here the microorganisms can do their work and nourish a planted tree.

Cremations, which according to Pablo Metz accounted for 97% of burials in Berlin last year, are performed using natural gas. With the climate crisis, the use of natural gas is no longer justifiable in the long term. In addition, there are dependencies on third countries that are no longer sustainable in the long term, as the Ukraine war reveals. However, there are already more sustainable options such as ice and paper. The latter is already possible in Germany. Please have a look at urnfold vorbei.

The funeral service itself should also be reconsidered from a sustainability perspective. Events like this usually entail long journeys by plane and car and cut flowers wrapped in plastic, which are only important for the brief moment of the funeral.

In the meantime, there are also a variety of digital mourning services, such as our virtual memory room farvel.space, where farewell ceremonies can also be held. Here, we pay attention to sustainability. For example, our servers are located in Germany and run on renewable energy. The software is designed to be as barrier-free as possible, so that people who are prevented from attending the funeral service for health or distance reasons can also take part.

In spite of everything, the loss is a blow of fate for those who belong to it, and pointing fingers is not the right way to go about it. Rather, it is a matter of creating alternative, more sustainable and more diverse offers that suit the people.

Many funeral directors, freelance or religious grief counselors, freelance or religious funeral speakers care and spend a lot of time with the loved ones to create an individual farewell ceremony. We have heard people in religious contexts speak from the audience who are intensely concerned with death and value time with loved ones. Of course, there are also attendants, speakers and funeral directors who are not passionate about the farewell and instead limit themselves to master data and facts. That's why it's all the more important to keep putting people with all their life stories at the center of our society. We may take the time, finally explains Pablo Metz, to find the right people for a farewell design, in whose hands we also feel comfortable with all the loss and grief.

In the Face of Death:

Dealing with death not only brings dark heavy stories, but also puts the focus on important questions of one's own life. Stefanie Schillmöller brings in central questions that invite reflection: "What is important to me? What are the stories that should stay? What are the values that I want to pass on? What are all the beautiful things I have experienced?" She further extends a clear invitation to engage with death as it can be a "good mirror" for the issues we carry around to value life in the face of finitude.

Numerous requests to speak and comments until the end created a great discourse with the panelists. We are very pleased that this lively exchange about this often hushed-up topic could take place at re:publica 2022. We would also like to thank Stefanie Schillmöller, Pablo Metz and Mathilda Goldreden, and of course the entire re:publica 2022 team for this great digital conference. The re:publica recorded the panel discussion and you can watch it in full length: